Just got home for the 2008 Boulder Naked Pumpkin Run. We shot some great interviews and the run as usual was excellent with many more revelers lining the mall to view the naked spectacle than last year. Also don’t forget to check out the Naked Pumpkin Run Interviews, we has a star studded cast that included Jesus, Borat and a jolly Priest.
END_OF_DOCUMENT_TOKEN_TO_BE_REPLACED

iTunes is the most popular digital media player application for both Windows XP / Vista and for the Mac. It is used for playing and organizing digital music and video files. It also acts as an interface to manage the contents of iPods as well as the iPhone. iTunes can also connect to the iTunes Store via the Internet to purchase and download music, music videos, television shows, iPod games, audiobooks, various podcasts.

You can download the iTunes digital media player for XP for free here via this link. If you have any problems with the install, check out this article on Apple.com due to some security features in Internet Explorer with Windows XP Service Pack 2.

Once you have played around with iTunes you probably want to load it up with some music. Note, you don’t need an iPod or iPhone to buy and listen to music from the iTunes store. Use the button on the left to get music

You can download the music to your computer and listen to it via the iTunes player. You can also buy gift cards online that will be email to the recipient. You can click this link to buy an Itunes gift card online. Free iPod, free iTunes Gift Card, free PSP, free Xbox, really! Let’s get this straight, free means you don’t have to exchange money for the items I just mentioned but you will have to exchange something. So how do these schemes work. Companies such as Rewards1, giftmonkey.com, and the like have deals with other companies such as credit card companies or cell phone carriers. So they get paid when you sign up for these services then if all goes as planned you will receive the gift. But here’s the problem with these kind of offers:

Ok so you get the picture. There is really no free lunch so just click the big banner below and buy an iTunes gift card the no hassle way. Think of the hundreds of dollars you’ll be saving :

Ok, having spouted off about how here is no free lunch, iTunes does offer a “Free single of the Week”. And yes it’s free as in free beer and free lunch. See the banner below and if the artist interest you then give it ye old click:

The most popular TV show in the world, Top Gear, is now available for download on iTunes music store. Join James May, Richard Hammond, and Jeremy Clarkson in Series 10 (the latest series as of Oct 2008) as they get up to their usual car stunts, homosexual jokes, nasty comments about environmentalists, cyclists and Germans and all the other guff that makes us love / hate them so much. You’ll need a copy of the free iTunes application so if you don’t have it get it here first then click the banner below: (Note: you will need a free iTunes store account, see details below banner on how to get one for free) How to set up an iTunes account once you have iTunes

1) Open iTunes (If you do not have iTunes, you can download it here at this link. 2) From the menus at the top Choose Store > Create Account. 3) Read through the Terms & Conditions, check the box if you agree to the terms, then click Continue. 4) Complete the form to create your free Apple ID (the login you will use with the iTunes Store). 5) Provide a valid payment method and billing address. 5)Begin shopping from the iTunes Store and get TOPGEAR ABOVE !!

My thoughts on Top Gear

By royal decree, residents of Boulder, CO are forced to throw out their TV sets and hang out in coffee shops, listening to poetry and partaking in social intercourse. I have confess I am a typical Boulderite when it comes to such things but Top Gear is my dirty little secret; it’s politically incorrect, Jeremy Clarkson is a right royal prick and for christ sakes it’s about bloody cars BUT I LOVE IT! Download an episode above and see why 300 million people round the globe watch this show each week. 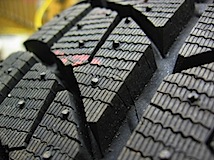 Let me start this article by pointing out the fact that all season tires are crap. Seems like every time my poor bastard friends head down to Big-O tires they get duped into buying this waste of wubber. Sure, if you’re going to be tootling around Boulder, CO in the Buick and at the first sign of snow and ice you close the shades and turn up the heat to 85 then keep on buying your all weather rubber but come on peeps, we’re in bloody Colorado!, driving with 6 people and two dogs crammed in the old A8 trying to get the car a little sideways to make the people in the back seat scared! It’s really all about the rubber and tread pattern. In summer, except when it rains you want virtually no tread and wide tires. In winter you want, tall narrow tires that’s rubber is soft and grippy at LOW temperatures and a nice tread pattern that grips into the snow and ice. Problem is all season tires sit exactly in the middle, so they are ok in the summer and probably not too good in the winter. One of the factors that makes a snow tire a snow tire is the composition of the rubber, the chemists who concoct the stuff ensure that at low temperatures, even below zero, it’s still nice and soft and rubbery. If you don’t believe me then on a ball chilling cold day go outside and before you jump into your chariot take a look at how hard the rubber is on your regular all seasons. If you’re lucky enough to have snows on note how nice and soft the rubber is.

END_OF_DOCUMENT_TOKEN_TO_BE_REPLACED

Due to the widespread use of Internet Explorer 6 and 7 I have a copy of XP home (SP3) running under Parallels on my trusty MBP. Switching back between the same web page on IE and Safari I couldn’t help noticing how bad the fonts were in IE. Being a recovering Windows user from years ago I did have “Clear Type” option turned on but fonts in IE still look somewhat jagged and light. After some poking around on the Interwebs I came across the Microsoft’s Clear Type Power Toys Tool. The little programs tweaks the Clear Type settings and low and behold after it worked it’s magic the fonts in IE look a lot better.

Simply download the tool from the link above and the little program will walk you through a series of onscreen tests, asking you what looks best. 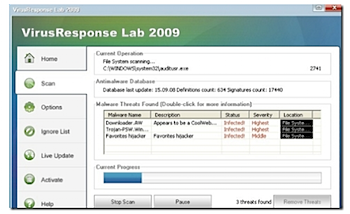 A pals computer came down with a nasty virus, a nasty little piece of software that presents its self as an anti virus program informing you that your system is teaming with viruses / badware and very kindly offers to remove them for a fee. These types of viruses are know as rouge scanners. The program went by the name of VirusResponse Lab 2009 and essentially takes over the host computer, intefering with the internet connection and incessantly nagging you with a window that asks you to register and pay for the program. Problem is that this nasty piece of work doesn’t do jack shite as far as virus removal and it has been reported that people who have actually ponied up their credit card number to pay for it have been hit with multiple fraudlent charges and that the program still keeps on reporting that your system is about to to go Super Nova.

My pal initially installed the old tried and tested Norton Anti Virus 2008. First off we didn’t have an internet connection so the program was pretty much useless. We eventually managed to get connect to the interwebs, updated the virus definitions but nuffin! Rebooted and the Virus Response Lab 2009 appeared in all it’s glory. This was starting to get personal! From past dealings with windoze I recalled a great little app called SpyBot Search and Destroy, free and quite effective. So download this we did and after literally 2 hours of letting it do its thing we got the same nasty appearing window proclaiming the sky was about to fall on our heads. Loading Spybot did do something as we were able to update IE6 to IE7 but after reboot VirusResponse was still around but it was somewhat easy to kill by doing a CTRL-ATL-DEL and killing it off from the task list.

After some googling I came across an article on Bill Mullins’ Weblog describing our pal, VirusResponse Lab 2009 and also listing some free programs that could supposidely remove it. I download a little program called Rouge Fix and it launched an antiquated dos batch file but after it ran and rebooted the poor machine we were finally rid of the bastard. According to Rouge Fix: ” USe Roguefix detection and removal script to clean computers with the Windows XP operating system that are infected with fake security warnings from a family of rogue scanners, Desktop/Homepage hijackers, their installing/accompanying trojans and ‘partner’ programs.” 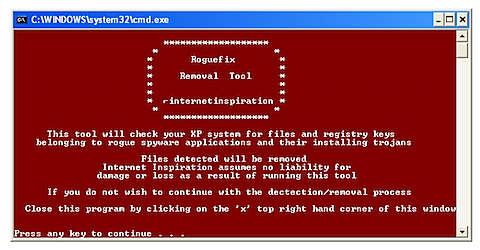 So after literally hours and hours of messin with the computer we were back in the proverbially XP saddle. I’m not exactly sure how we removed the nasty but Norton appeared to be useless, and SpyBot SD didn’t appear to do shite either. So perhaps we should of done some more research first and I did notice that the XP was using service pack 2 not 3 but the moral of the story is …… well, being a Mac Fan Boy all I can say it get a bloody Macbook with a copy of Parallels and XP home from Newegg.

So after trying Spybot SD, Rouge Fix Virus Response Lab 2009 Remove Tool did the job. If that doesn’t do the job for you then you can also try Bleeping Computer, SmitFraudFix and MalwareBytes . Good luck, cos you’re gonna need it and let’s hope you have an easier time getting rid of this nasty than I did.

At a rally on Wed, John McCain referred to his supporters as “fellow prisoners” Is our old pal still fantasizing about bygone games of “whoops, I’ve dropped the soap” and “prison rodeo sans horses”? I am seriously thinking of starting a new group for this old codger, “Convicts for Mc Cain”.

Something as equally weird