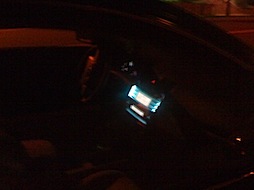 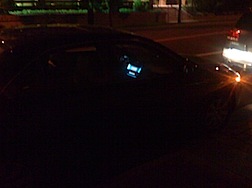 While escorting a lady friend back to her car in downtown Boulder, CO I noticed a car with it’s lights on. My friend commented that she remembered seeing the lights left on when she left to join me at a coffee shop some 2 hours earlier. We both had a little chuckle at this poor bastards folly but then I noticed something rather odd, the engine appeared to be running too. Upon closer inspection I realized what craziness was going on, this was no ordinary car but a hybrid! It seems that these cars have an undocumented feature. If you’re unfortunate or stupid enough to have left your lights on, do not despair, when the electronic wizardry detects you battery is about to shit the proverbial bed it will automatically fire up the engine and charge it, then automagically turn off the engine. Wow, and I though the only benefit of a hybrid was saving baby unicorns and lousy looks. So there we stood, jaws open watching this car singlehandedly burn though our precious high priced gasoline reserves, all by it very own-some. I could just hear the sound of a Saudi prince rubbing his hands together in glee!

In the republic of Boulder, Hybrids are as common as choir boys on a late night visits to the Vicars house so to see one that has fallen so far off the wagon was both alarming and comical. On a serious note though, I wonder what chain of events led up to this fall from grace. Perhaps the keys were still in the ignition, person left car with lights on and the rest is just history. Was this Toyota Camry Hybrid mad at it’s burkenstock wearing, sushi eating, yoga mat carrying owner. Perhaps all was normal as she left this non desrcript sedan, then some part of it’s flight of fight brain kicked in, “I shown you bitch!” and it switched on the lights! Then after a while some higher more enlightened part of it’s brain kicked in and it begrudgingly turned on the engine to charge the rapidly depleting battery. Then the whole cycle repeated it’s self, like some bizarre OCD manifestation. Perhaps as I sit here writing this article some 24 hours later the car continues to cycle on and off, headlights burning brightly in the night? I wonder how long it could have kept up this silly game and I would of loved to of seen the owner face when she returned. But as I shot a few blurry photos with my iPhone, bade my friend goodbye and started on my bike ride home I left the scene with more questions than answers.