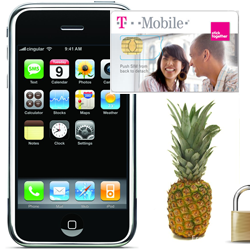 Update Feb 2011 – I have just spent 5 hours or so trying to get my poor old 3G jailbroken and unlocked again. Six months ago the process did see a lot easier. HINT – Make sure you use the correct RedSn0w version AND the correct restore file. If you don’t you’ll waste half a day like me. You can’t use a newer version of RedSn0w or start with iOS 4.1 !!

JUNE 25th – 2010 – This little tutorial is designed for absolute beginners and will show you how to Jailbreak and Unlock your iPhone 3G (Not 3GS or Iphone 4 – 3GS & iPhone 4 users can use the following link and simply visit the Comex website using your iphone 3GS or 4). Jailbreak to allow apps banned by Apple on your phone and then allow you to unlock the phone, dump AT&T crappy cellphone service and switch to another cellphone carrier or cheaper AT&T plan. (See this link to upgrade to IOS 4.0.1.

First we’ll upgrade you to the brand spanking new iPhone 4.0 operating system just released and then have our way with your iPhone. But first some basics.

Jailbreak? Unlock? Why ……? What does it all mean?

Jailbreak: Jailbreaking is a process that allows iPad, iPhone and iPod Touch users to run any software code on their devices, as opposed to only that code authorized by Apple. Jailbreaking doesn’t slow down your device or use any extra battery, and is fully reversible (just restore in iTunes). A jailbreak lets your device be how you want it. We need to Jailbreak the phone first before we can unlock the phone. Why Jailbreak then? COS WE WANT TO UNLOCK OUR PHONES!!! Hint —>> Jailbreak > Unlock > New Sim Card + bye bye ATT crappy service !!

Ok, why unlock: For me personally I’m tired of paying $110 per month for a phone that constantly drops calls and has 3G data speeds of a bygone era dialup 28k modem … THATS WHY!!! I am changing to a carrier that actually works in my neighborhood until AT&T improves it’s signal (yeah right) or the Verizon iPhone comes out (hopefully at the end of 2010).

Unlock: Network providers (cell phone companies) will lock a phone to restrict the use of it to a specific country and network provider. Unlocking simply means that you can run your iphone on another carriers network or use an unsupported AT&T plan such as pay-as-you-go. Note: the other carriers network must be compatible with your iPhone which uses specific frequencies and cellular standard, in our case this is GSM. You’ll simply buy a new plan with a new SIM card and pop it into the top of your phone and off you go. This is great if you’re traveling overseas and don’t want to use AT&Ts expensive overseas plan. NOTE: As of June 2010, Verizon does not use GSM so you won’t be able to use them :(, Sprint either so Tmobile is your only choice or you may wish to sign up fo AT&T pay as you go – $100 for 1000mins, no contract)

Step one: update you iPhone 3G to iOS4
You must have the latest version of iTunes so before you upgrade. Mac users can run Software Update (click the little apple icon on top left of you computer and select Software Update …..) Let Software update do it’s thing and you will probably have to restart your computer too. Next plug the little bugger into your computer, the iPhone that is, and launch iTunes and click on the iPhone icon in the left panel. In the main Summary screen click on the “Check for update” button and run through the various steps it’ll take you to do the update. (NOTE: there have been several report of the entire update process taking a long time. In my ease, after the update was downloaded it took a good hour of so do a backup first but your result may vary, just a heads up. )

Step2: Jailbreak
Your phone should now be sporting a brand spanking new OS so let get started with this Jailbreaking. Make sure your iPhone is unthered (not connected vai usb cable) to your computer.

a) Start out by downloading the Official iOS4 release from apple. Get it by – right Clicking on this link and doing a “save link as – Firefox ||| Download liked file – Safari ||| IE “Save as”. You can see a full list of all iPhone IOS releases here including 4.0.1.

b) Now you you’ll need to download the actual Jailbreaking tool and point it at the iOS4 that you just downloaded. It’s called Redsn0w – A cross-platform jailbreaking, unlocking, and customizing tool for iPhones and iPod touches. You can download Redsn0w for Mac here – Windows Version here 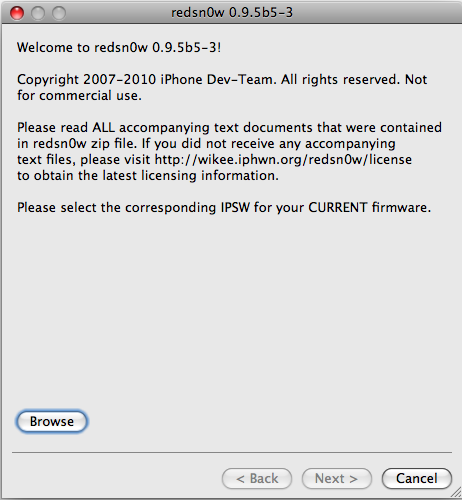 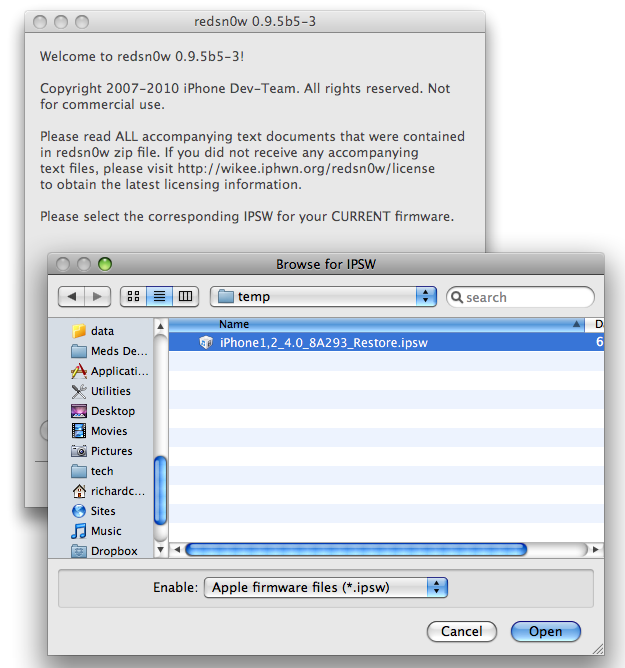 You should now get a message saying that Redsn0w has identifed the firmware: (hit Next) 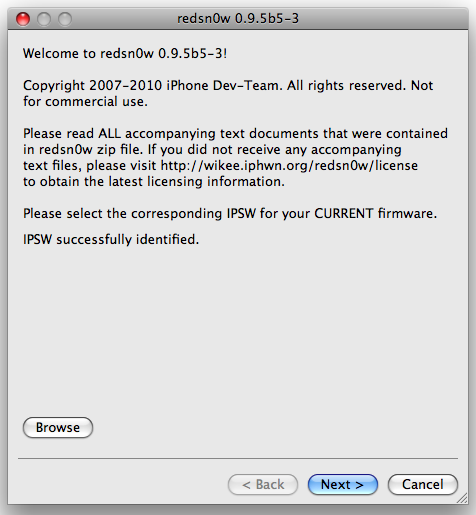 It’ll get busy and you’ll see this screen:

Then you’ll see this screen – select “Install Cydia” and the other option too:
DO NOT ENABLE MULTI TASKING AS SHOWN IN THE SCREEN SHOT BELOW AS IT WILL SLOW YOUR PHONE DOWN TO A CRAWL – TONS OF REPORTS OF SLOW 3GS ON IOS 4.0 AND THIS WILL MAKE IT A LOT SLOWER 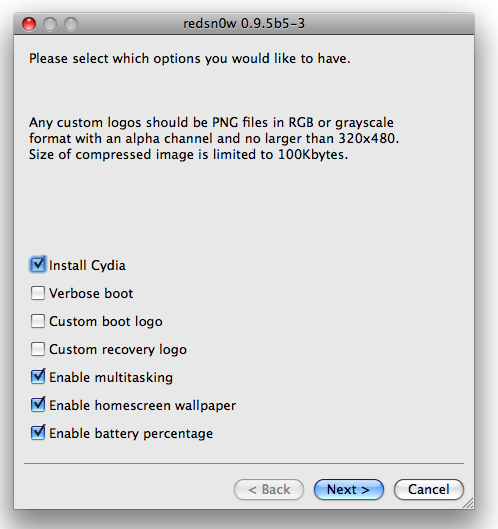 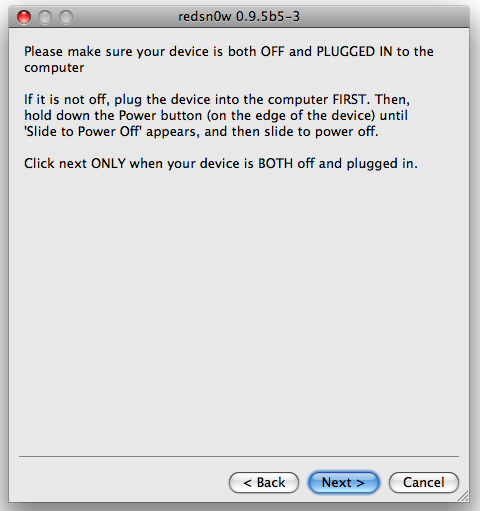 Now the somewhat tricky part. You gotta enter DFU mode by pressing a combination of the power button and the home button in a certain sequence for a certain amount of time. Its actually quite easy but just make sure you what the screen tells you. Start out by holding down the power button for 2 seconds and then at the same time the home button for
10 seconds. (now follow the instructions on the screen) 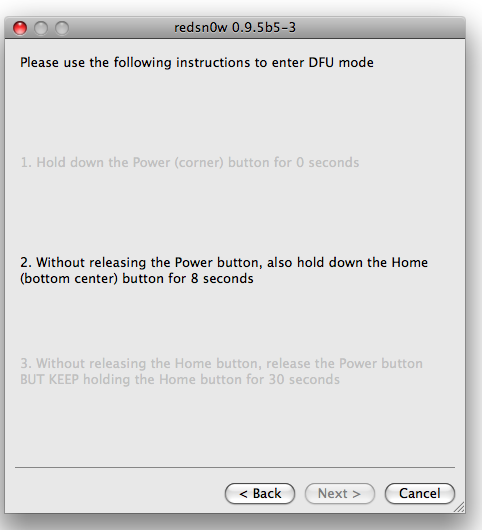 No sit back and let it do its thing, you will see a hard drive icon 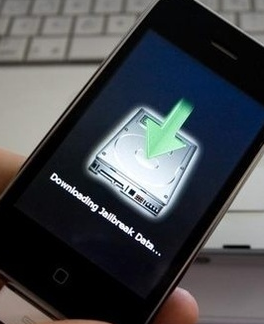 and some messages and possibly a walking pineapple !!! 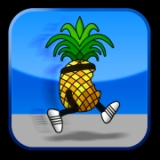 You Phone will eventaully reaboot and now you’re iPhone 3G will have all the iOS4 goodnes Mr J intented such as multi tasking, multiple wallpapers and other stuff left out for the 3G.

Finishing off: To Finish off the Jailbrake process scroll to your last iPhone screen and you’ll see a little icon (may be gray) call Cydia.

From the good folks at Wikipedia: “Cydia (pronounced /ˈsɪdi.ə/) is a software application for iOS that lets a user browse and download applications for a jailbroken iPhone, iPod Touch or iPad. It was developed by Jay Freeman (also known as “saurik”).” In a nutshell, use Cydia to download programs for your Jailbroken iPhone that you can’t get at teh regular Apple App store. Cydia Cydia provides a more user-friendly graphical user interface for some open-source software-installation tools.

Click on the icon to open it and a screen will pop up, choose the Cydia Complete Upgrade. 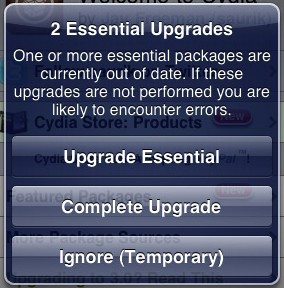 That’s it, you’re done, sit back and revel in the glory of your new unlockded iPhone 3G running iOS4 !!! No to get it working on another network – Unlocking !!

Unlocking is pretty simple really , open up Cydia and go to the search window by clicking the little icon on the bottom right of the app. Search for utrasn0w (that is a Zero not an oww) . Click on it and it should install. Note, the screen shot below show a green check mark that indicates that the package / program has alrady been installed – you will not see the check mark. This should enable you phone to accept SIM cards from other carriers. I just tested a T-Mobile pay as you go and it appears to work fine. 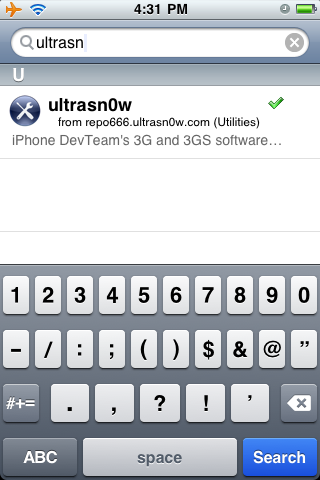