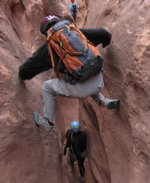 Below are my perosnal notes on a Canyoneering trip I took to the Escalante region in southern Utah during the Memorial day weekend 2007. Feel free to add comment at the end and contact me personally if you want to know more about the outdoor group I belong Chaos Boulder. We normally takes a jaunt down to the slot canyons in southern Utah in the Spring and Fall each year. On this trip I was sans my biatch Dan so I rode with AJ. We left Boulder at about 4pm getting there at around 1.30am. I slept like a babe, no tent and had a strange dream about bugs eating me. When I woke in the morning I noticed that I’d slept on top of a fire ant’s nest – luckily they’d been sleeping too.

The first day Rom, AJ, myself, Brian and Ben decided to warm up with an X canyon, Egypt 4. X canyons are the most physically demanding of all canyons, even Chop Slot is only rated an R. We all started off in good spirits, after all it was only about 2km long or so – how bad could it really be. Most of us who’ve done canyons before have stemmed – you basically climb over an obstacle or two for short distances using your arms and legs to get you up and over. You’re blazing down a canyon and you hit a log jam, or water, up you go on the side of the canyon walls like bloody Spiderman using your prefered method of motion wether it be bum on one wall and both legs on the other or in my case, a leg on hand on each wall. But as it turned out, E4 what only ONE BIG STEM – FROM START TO FINISH! I swear we touch ground twice and that was for 20 or 30 feet then back up on the walls like a friggin tree monkey! The bloody stems were 40ft off the ground in some cases, so no falling or even thinking about falling. Now I’ve got nothing against stemming but 1.5km of it is a little much to say the least. I don’t really do any upper body workout so after about an hour of stemming I was nearly at my wits end. My climbing technique is also shite, I’ve been bouldering a couple of time and my arms are ready to fall off after about half an hour or so. So when you add one LONG stem to bad technique, no arm or knee pads and, I had a heavyish pack too, you can see where we’re heading with this story. After about 3 hours I was ready to abort this goddam mission impossible, I wanted out, bad! We luckily came upon a climb-out spot before the end and I manged to start a small mutiny too as Rom and Brian joined me with the AJ and Ben soldiering on for what turned out to be only another 500 or so meters. I was well and truly whipped and small note to self and trip planners: let’s not do an X canyon on the first day again!

After the Egypt 4 incident we hiked back to the cars and drove to the start of the hike down to what would be our home until Monday morning. Another suggestions: Let’s not have to hike 3 miles down a sandy rocky slop after doing an X canyon! When I finally got to camp, a spot where fence creek joins the Escalante river I was well and truly knackerd out!

We got up at a somewhat godly hour and left at 8am to do Neon. I’ve done Neon before so I knew what to expect but we decided to drop in further up the canyon to add as little spice to our sorte. I was glad they did, it made Neon a little more challenging but it was still a pleasant experience non the less. The upper part even had some deep water to swim in the , something missing from the normal Neon route. Some of us decided to trap ourselves in a huge keeper pothole to see if we could get out. AJ filled the little rope bag thingy with rocks and tossed it over the lip of the pothole and together with a few packs that also had ropes attached to them we were all able to climb out. Getting out of the keeper pothole rang reinforced what I’d read on a canyoneering website: you can’t just be a seasoned outdoorsman or climber you have to be an experienced canyoneer. When you face a huge log jam or get stuck in a keeper pothole it’s all about technique and I’m happy to say these lads knew their stuff or I’d still be in that bloody keeper pothole today! We also ran into some huge black crows that were somehow not able to fly out of the canyon. The poor little things were so sad, ruffled feathers, wings all cockeyed and they were so exhausted they even let us pick them up and carry them for a distance. We surmised that they’d flow down from about to eat a tasy morsel of a poor creature that had met it’s maker down there and on trying to fly out had injured their wings due to the narrowness of the canyon bottom. Even if we could of carried them for a while I’m sure there would not of been any way to rap with them so I presume they didn’t make it but let’s hope one got out and lived to tell the tale!

I went with the less aggressive group as I didn’t fance bivying on some sand bank for the night and getting bitten by 1000 deer flies and bugs just so we’d be close to a slot. The sane non aggressive group took a little walk down to a canyon called Ringtail. It was lovely and cool in the mouth and we hung out there for a while. We didn’t end up getting very far down it due to slippery narrow walls that we didn’t feel like climbing up. In the afternoon I lay out on the rive bank with my Ipod and rocked to Queen, boy can that Freddie Mercury rock the house.

The nutjob more aggressive group took on Chop slot, getting up an ungodly hour while I had a nice “lie in” till 8 am. This slot claimed two lives back in 2002 so it’s notoriety added to the excitement and the loss is a lesson to us all – respect, respect them canyons! I was tempted to do Chop but I really don’t like the cold and when I’m good and ready I’ll do it, really I will! (Good and ready means: 7mm full wetsuit, knee and elbow pads and a willingness to get up early)

I spend the day tooling around with my GPS and a map AJ had given me, retracing the other more aggressive groups steps for the fist 2km or so then broke off the trail and attempted to get as close to the last rap as I could. My plan was to look down into the grim section as it is called and hurl insults at the aggressive group. It turned out that Chop Slot was so deep 200-400ft I couldn’t see jack shite, never mind get near to the last rap but I could hear them quite clearly from my birds eye view above but as loud as as I could shout they didn’t hear me at all. It was fun to spend some quality alone time and I had fun with the GPS. I made little marks in the sand on my way there, marking them with the GPS and then trying to locate them on the way back. The group actually finished Chop in record time, about 1.30 pm. Most of the group headed back to camp when done but some ass clowns more brave members of the sortie (Ben and Tim) decided to go back through the GRIM section and do it all over again, yeah boys, BOOYAH! – bloody well done!!! They certainly kicked Chops ass but in the future the canyon will get more log jammed and it’ll be a much more difficult I suspect so revel in your time chaps, revel!

Up early, we embarked on the standard “grit your teeth and carry your heavy heavy pack back to the cars” hike that we did last year. I donned my headphones and with Freddie raging on the ipod I forgot about the pain and the heat and I was up on top in no time without much drama. We had planned to rap off some waterfalls (these guys are relentless), but we ended up at Karva Coffee house. The food was not really up to par compared to times before (my potatoes were undercooked) and I discovered a nice little rock in my dish that I almost bit down on but thank god I was chewing lightly or I ‘d of sued them for a new toof. I felt it my duty to tell our waitress about my find but on taking the little rock from me she merely looked at it with a slightly puzzled expression on her face and walked off without saying a word. I wasn’t in a fighting mood but looking back at it now I should of said more. The ride back was uneventful and we got back into Gunbarrel at about 10.30pm

Overall a very enjoyable trip, AJ’s trips seem to be more intense than Rom’s so don’t know if I’d go on another, they always seem to go, go, go but one can always choose to skip a day or two. The mosquitos and deer flies were relentless, probably the least enjoyable part of the trip but next time I may be forced to don some Deet. I’m going to post a related article on beginner canyoneering and will link to it here when it’s done. Add your comment below: